Recently, I repurposed ceiling fan blades and other materials and constructed an airplane.  I also made some coffee cup signs, using a ceiling fan blade we had to take off our living room fixture.  With one of the three remaining blades, I made some Christmas decorations.  I’m sharing How to Repurpose a Ceiling Fan Blade into Christmas Decor in this post.

First, I made some hot cocoa cup signs similar to the coffee cup signs.  To make these, the ceiling fan blade was cut at both ends about 5 inches from the tip.  After they were cut, I put some wood filler in the existing holes. 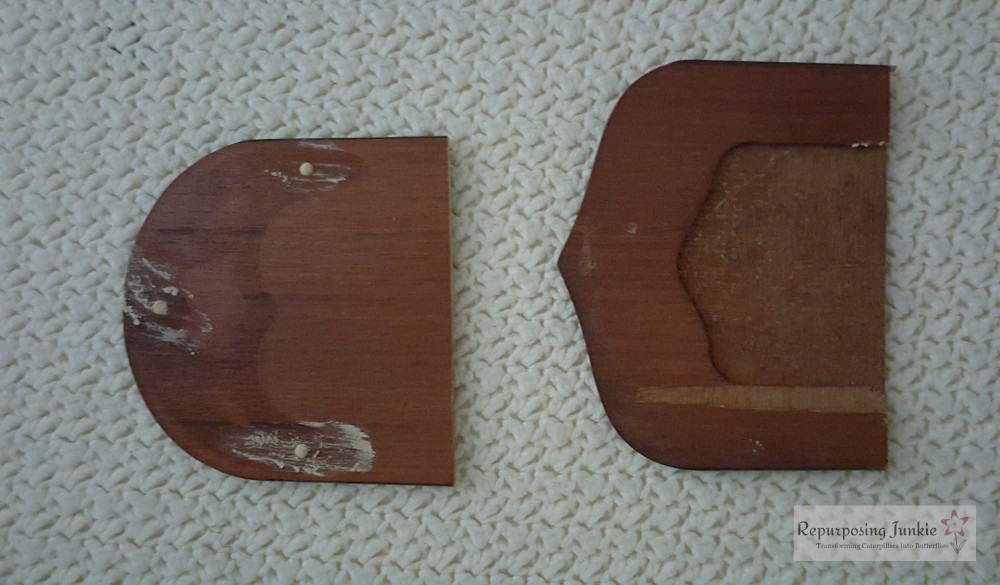 I sanded and painted them a beautiful white color. 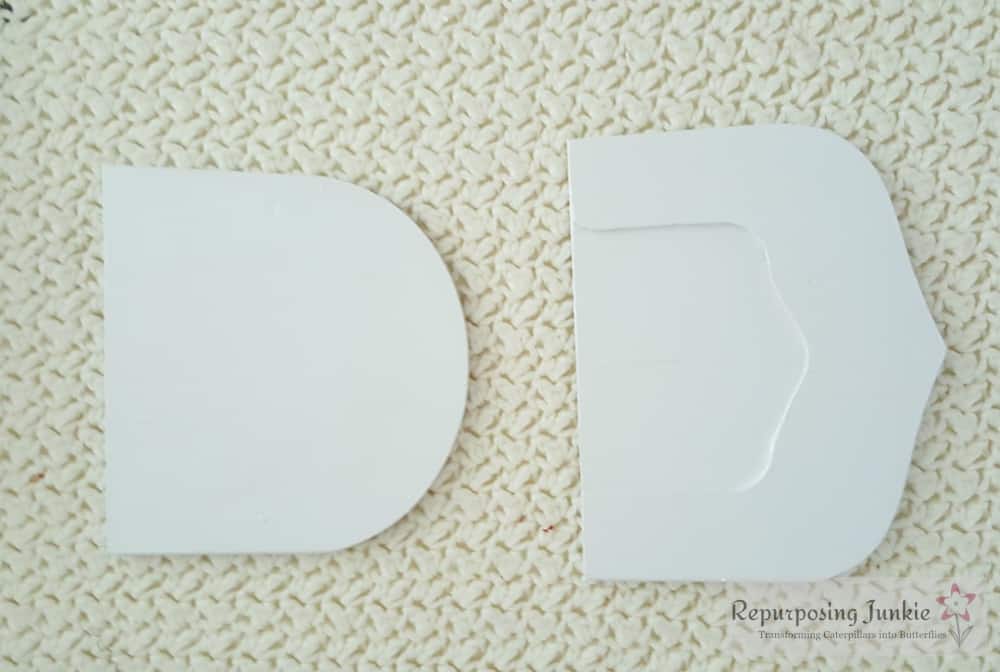 After the paint was dry, I drilled into the fan blade edges, so I could attach the cup handles. 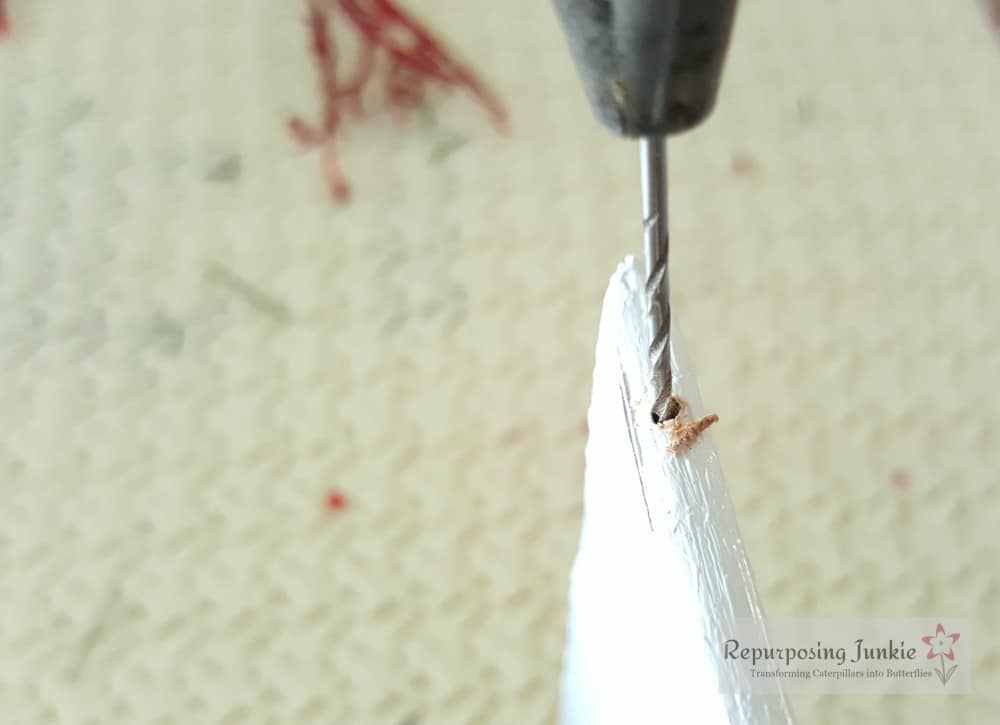 One handle was made using a twig from a fir tree, and the other handle was made from a red, wire sprig I bought at Hobby Lobby.  In the small holes that were drilled, I dropped a little hot glue in them, and put the handles in the holes. 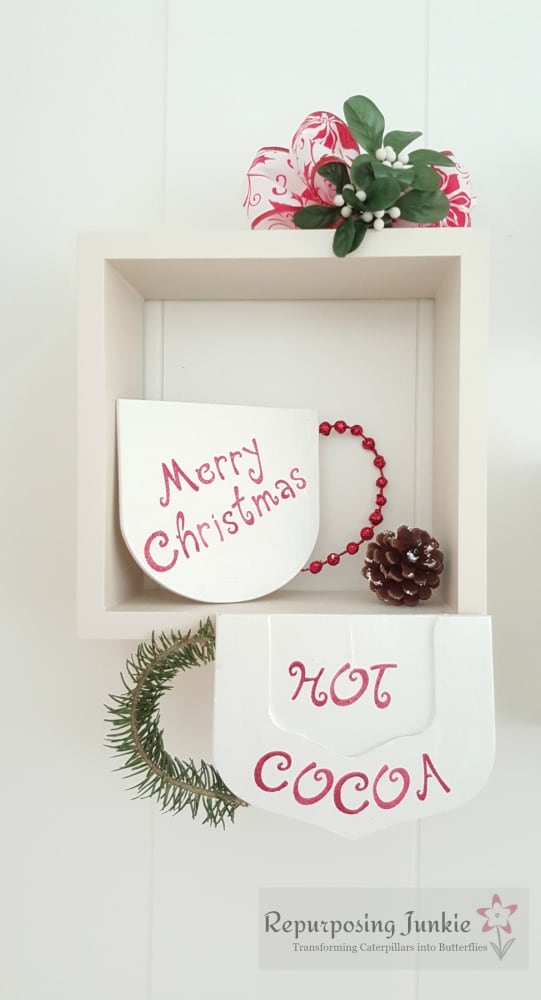 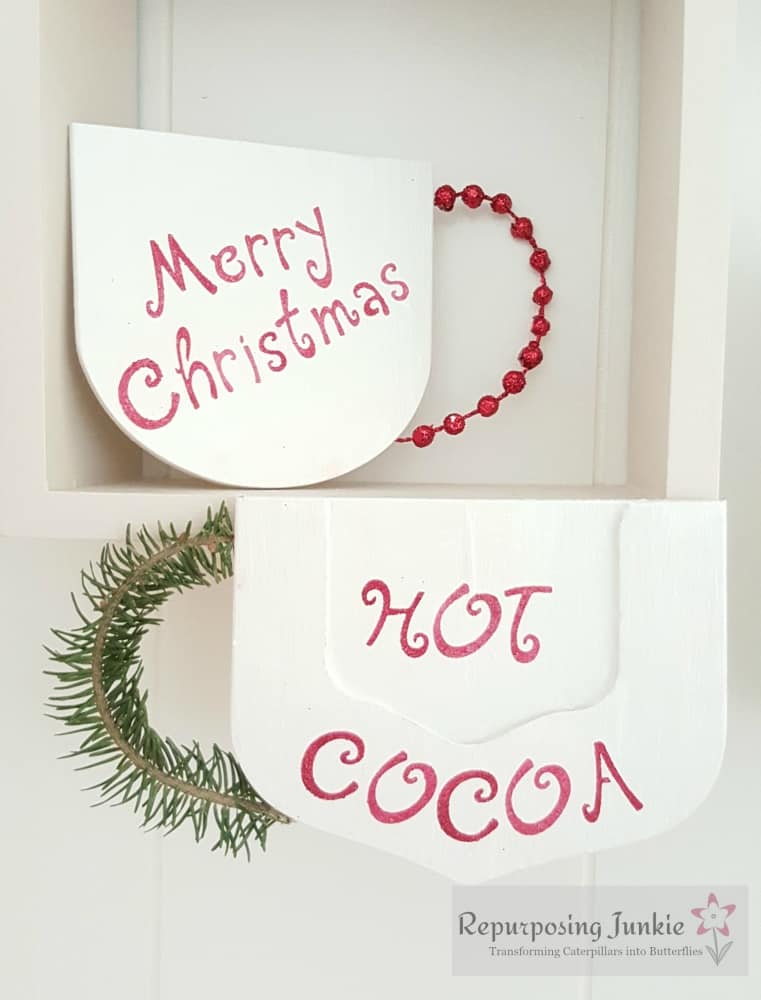 I stenciled “Merry Christmas” on the cup with the red sprig using these alphabet stencils. 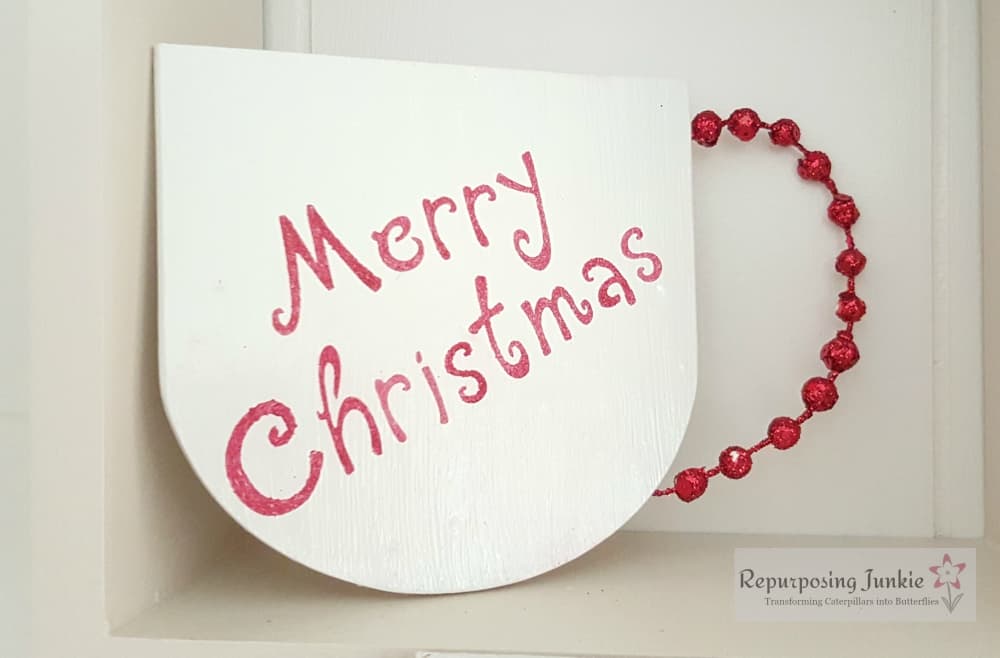 I stenciled “Hot Cocoa” on the cup with the fir tree handle. 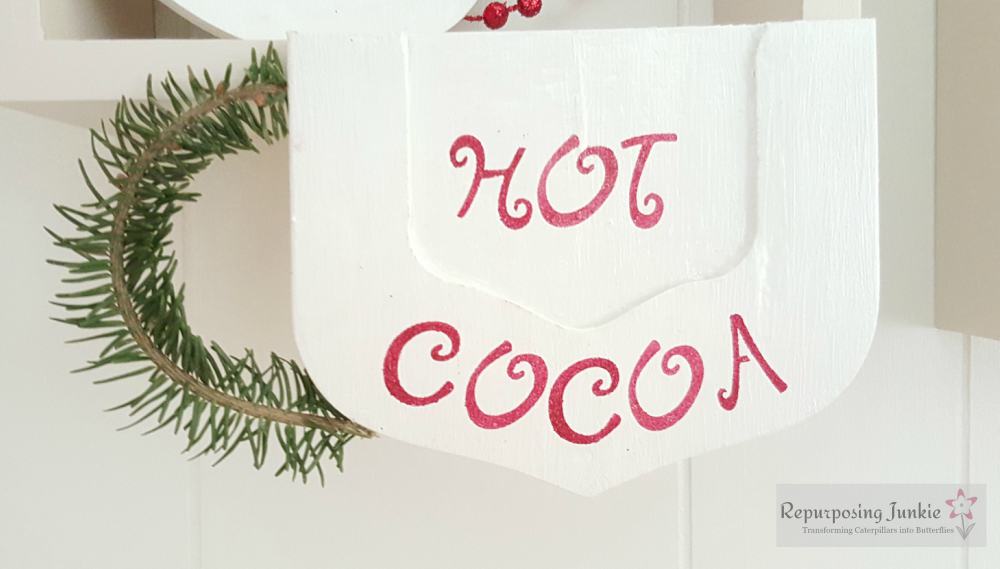 These particular blades are so thin that I chose to place one on a shelf; the other is attached to the front of the shelf, using a few pieces of sticky Velcro. 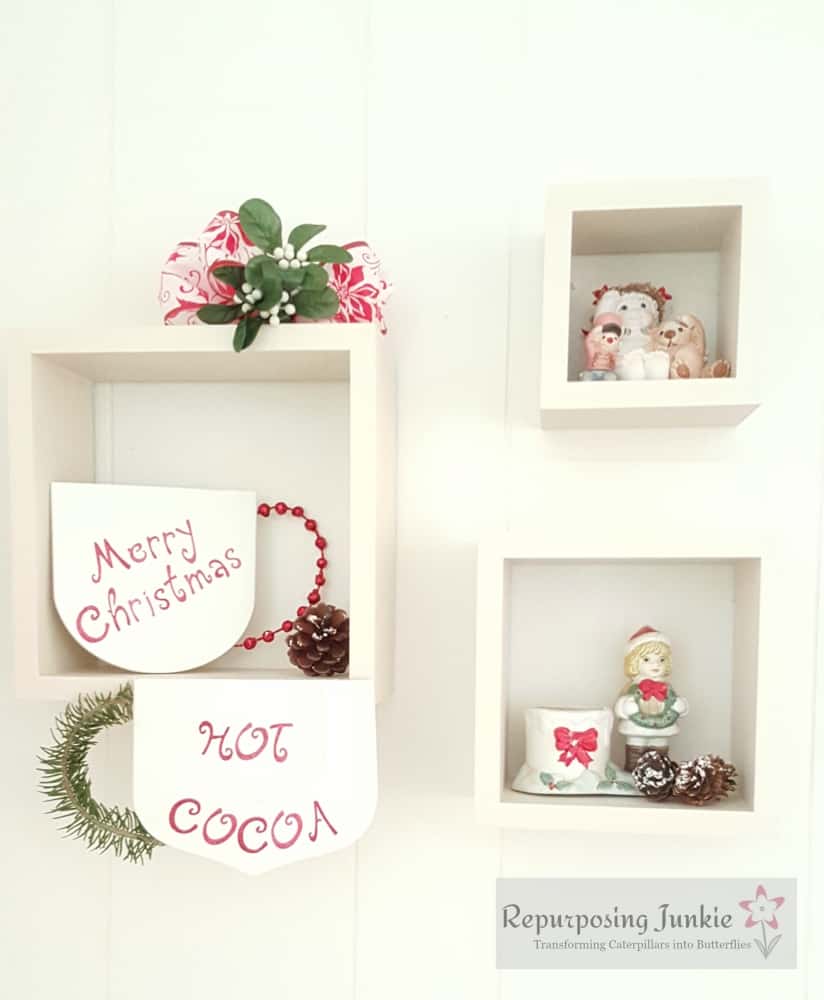 The second project that came from this ceiling fan blade were two angels.  After the tips of the ceiling fan blade were cut off, there was still a good portion left, and I knew I wanted to make angel wings with the remaining blade.  I made a rough drawing on the blade of how I wanted the wings to look, and my husband used a carpenter’s square to make my lines a little more precise.  He, then, cut two wings using a Dremel, and a circular bit attachment. 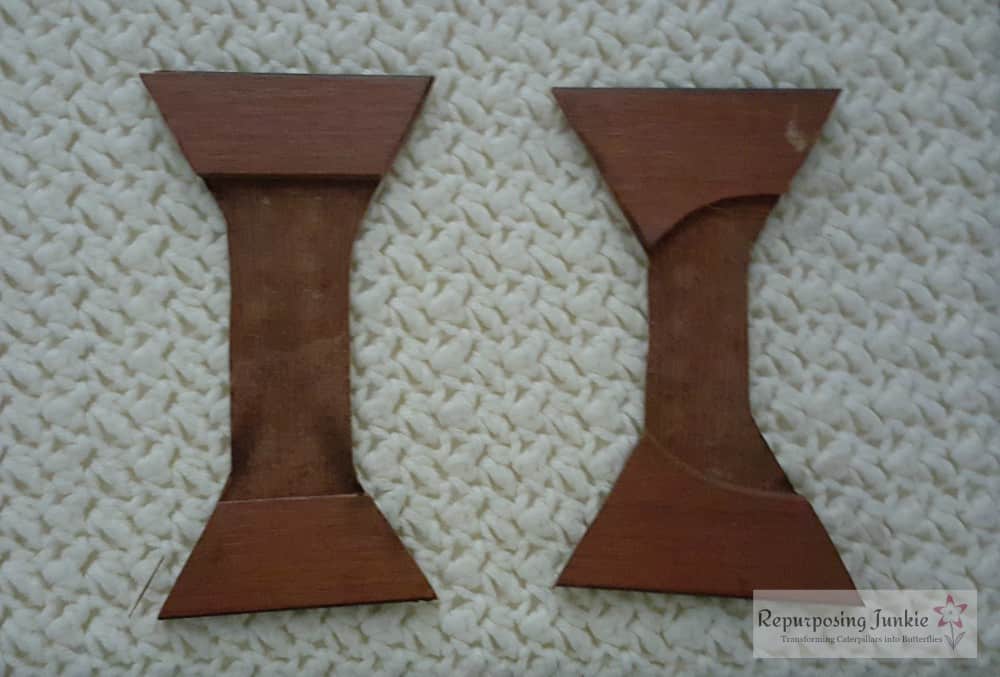 I sanded and painted these wings. 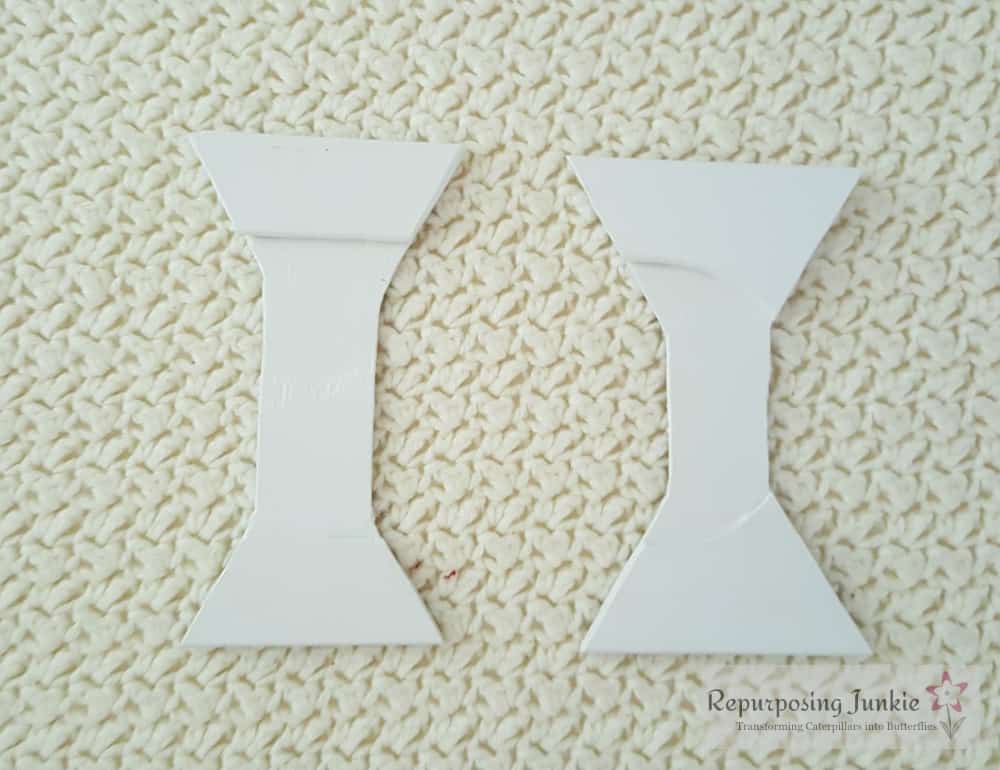 I bought two spools of ribbon at the Dollar Tree to make some lovely dresses for these angels. 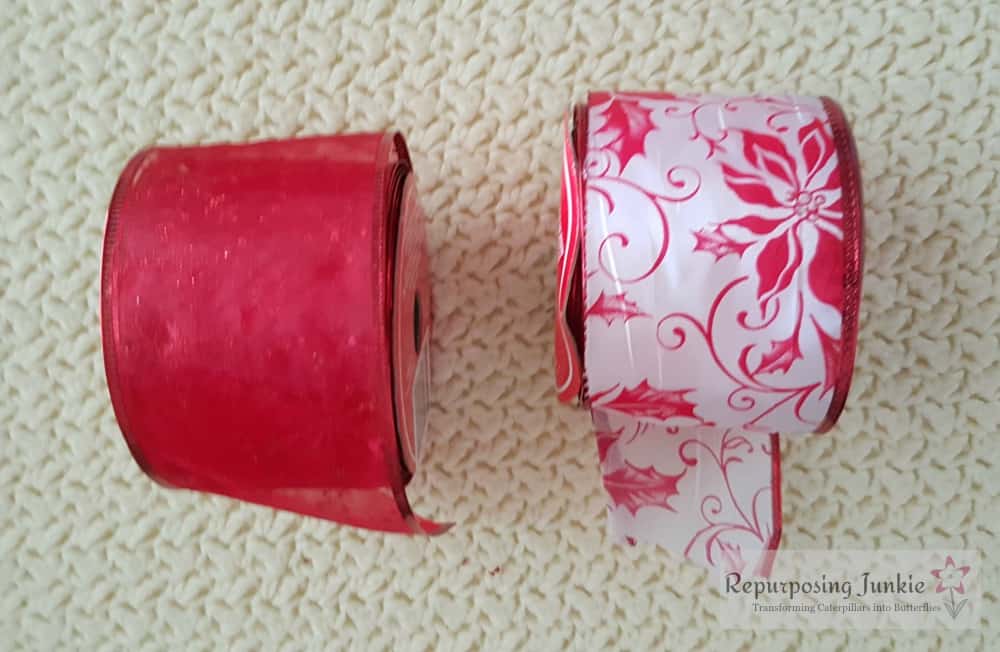 I cut the ribbon into 4 short strips and 3 long strips of each color, so that I could stagger the length of the dresses. 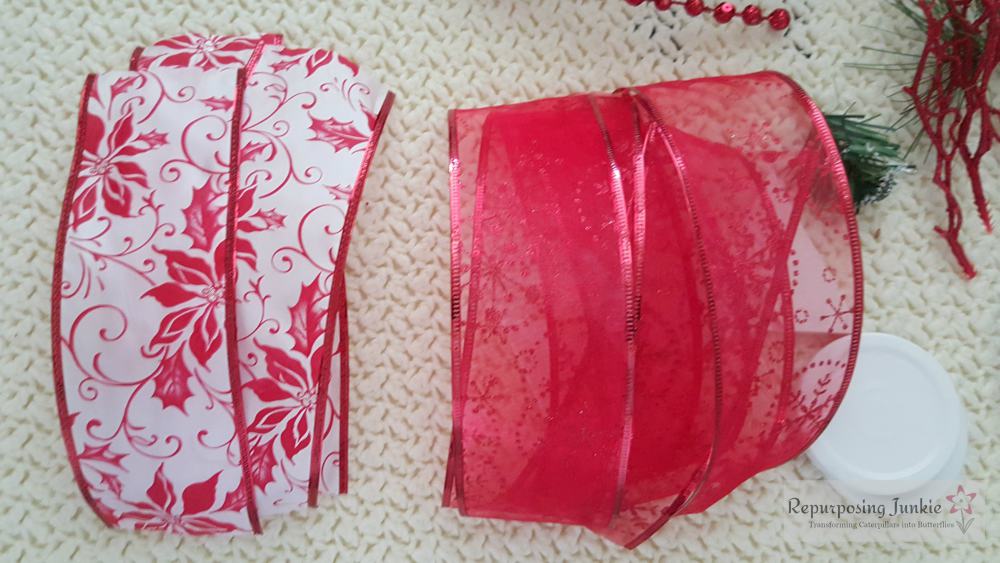 I hot glued the ribbon onto the back of the fan blade, and draped it over to the front of the wings. 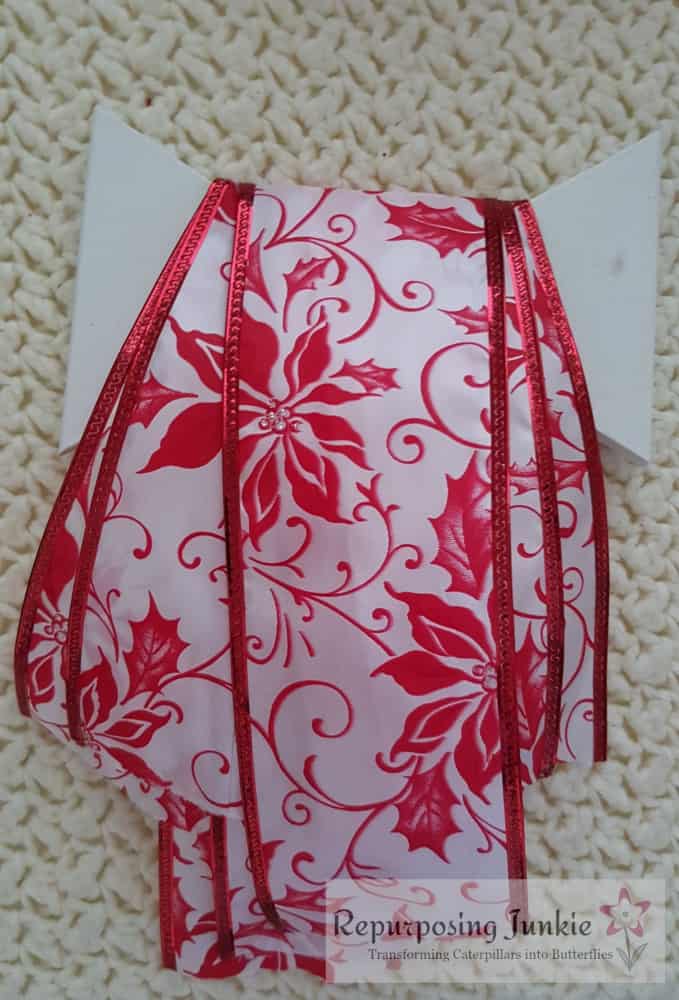 I painted jar lids white, and used them for the angels’ heads. The lids were attached to the top of the wings using hot glue. 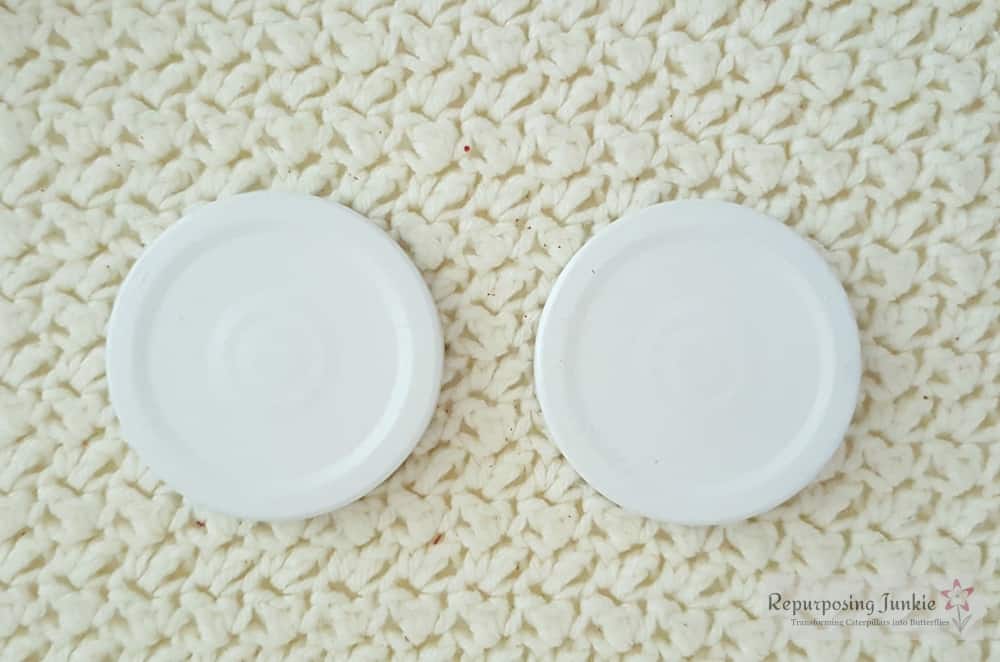 A little bit of greenery was used to make some hair on the angels.  I took some red, wire sprig, and made a collar and a halo for the angels, using hot glue to secure it into place.  To stabilize the head and the body, a paint stir stick was cut and hot glued on the back of the wings and the back of the lids. I also wrapped another little bit of the red sprig around the paint stir stick to act as a hanger. 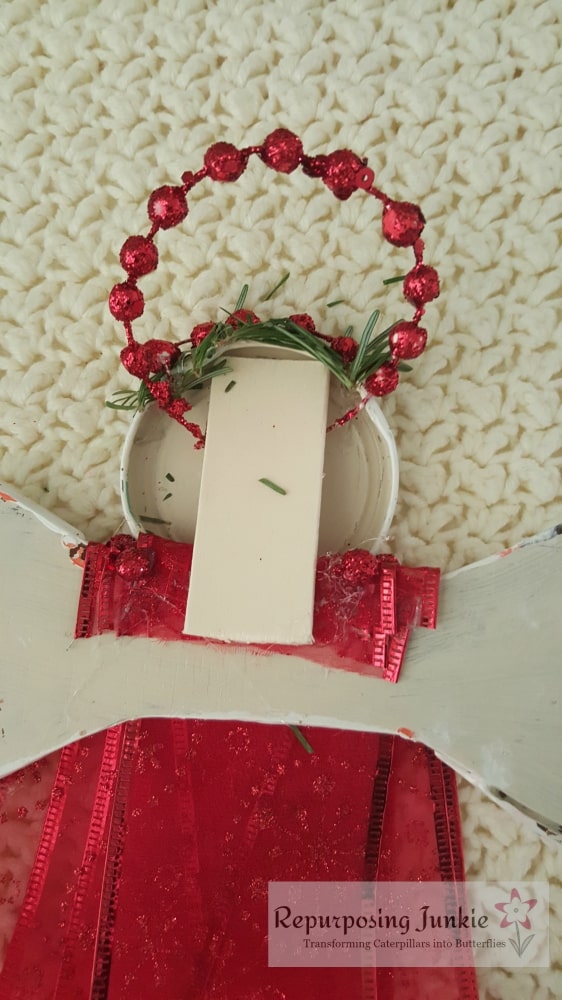 Here are these angel cuties: 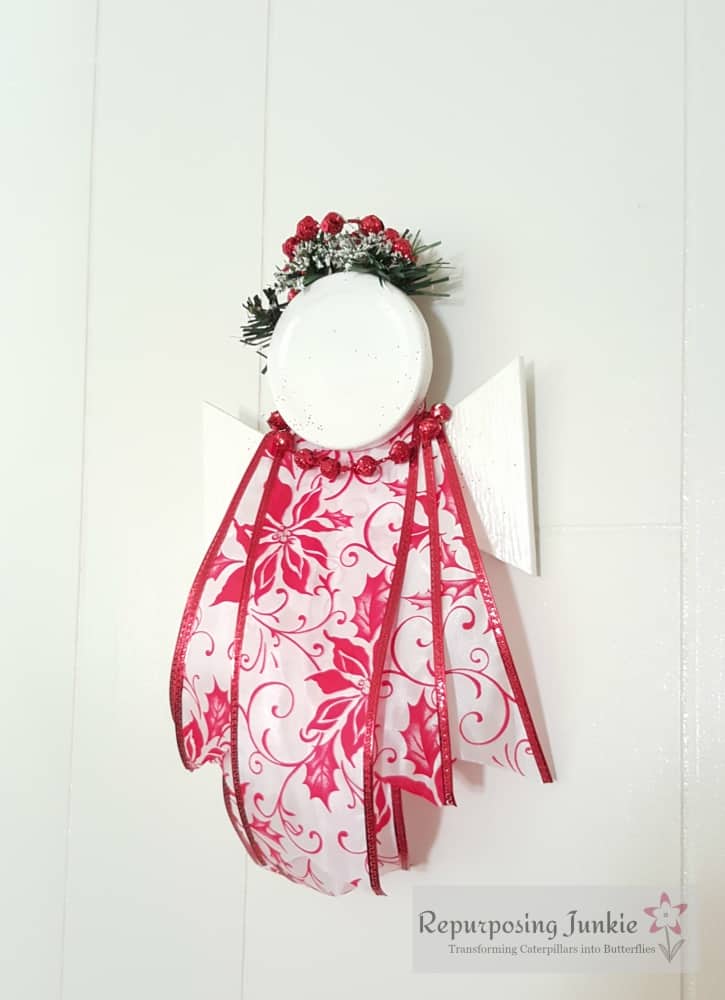 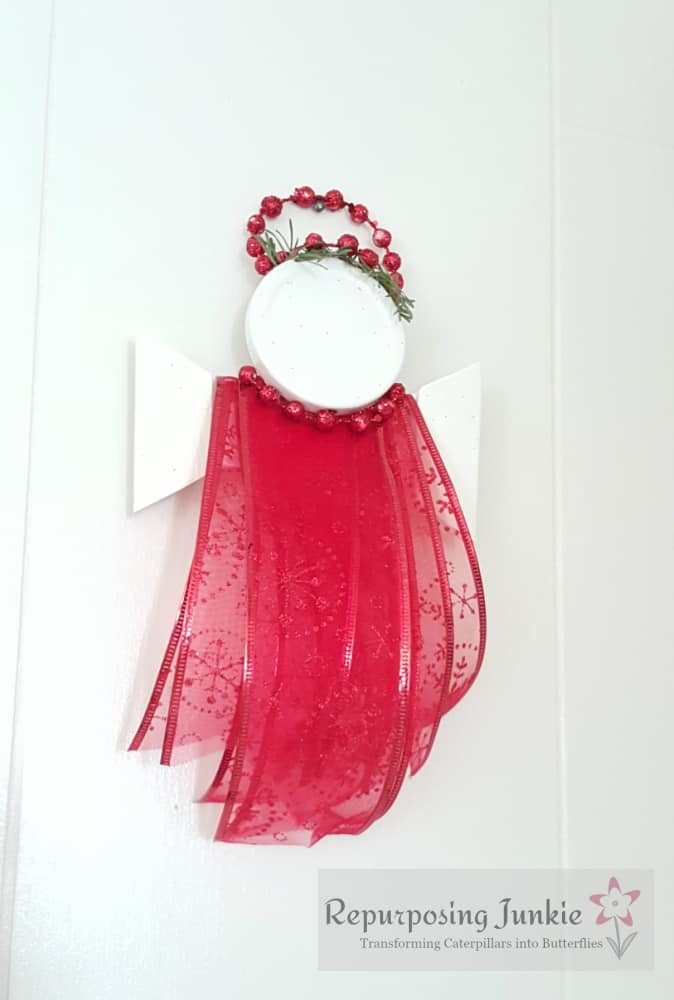 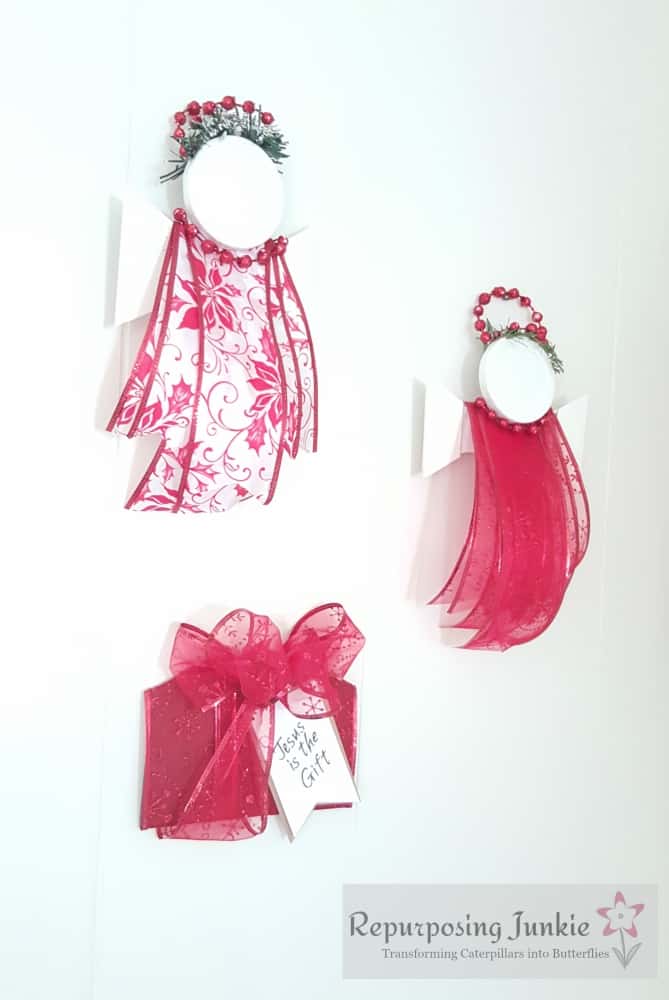 The Present from a Repurposed Ceiling Fan Blade

After these two projects were cut from the fan blade there was a small portion left. My husband handed this to me and said, “This was leftover, I’m not sure if you want it or not.” I set it aside until I could think of something to do with it. 😉  It didn’t take long until I saw a present in this little leftover block. 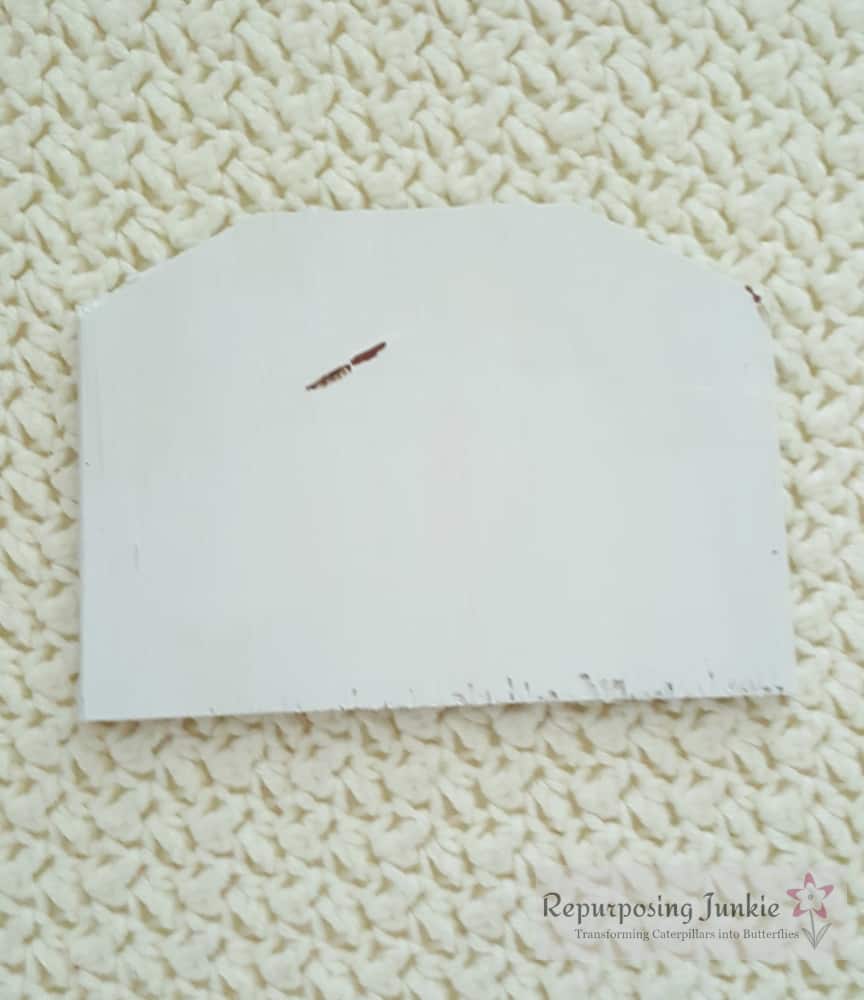 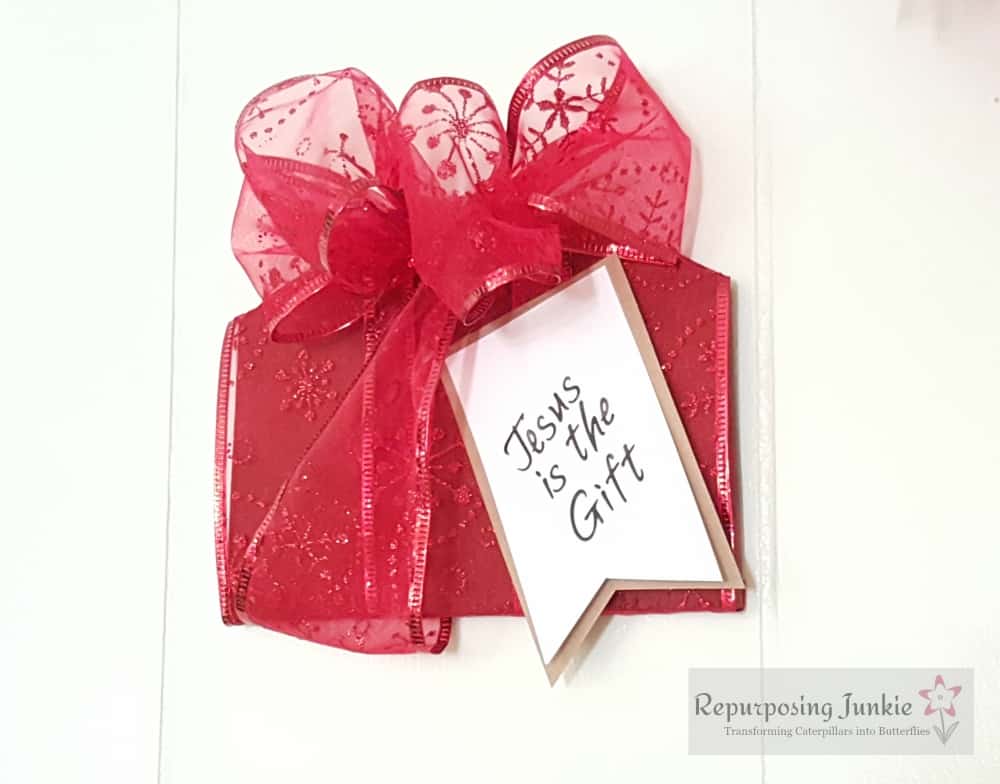 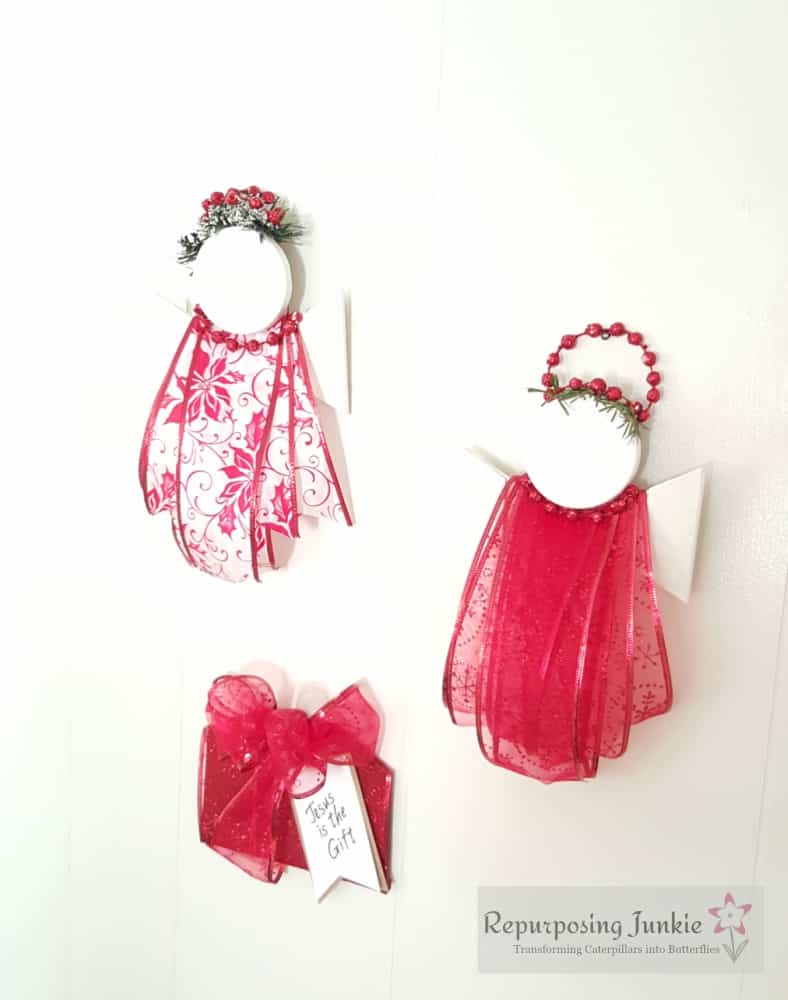 Here are all three projects hanging in the corner of my kitchen. 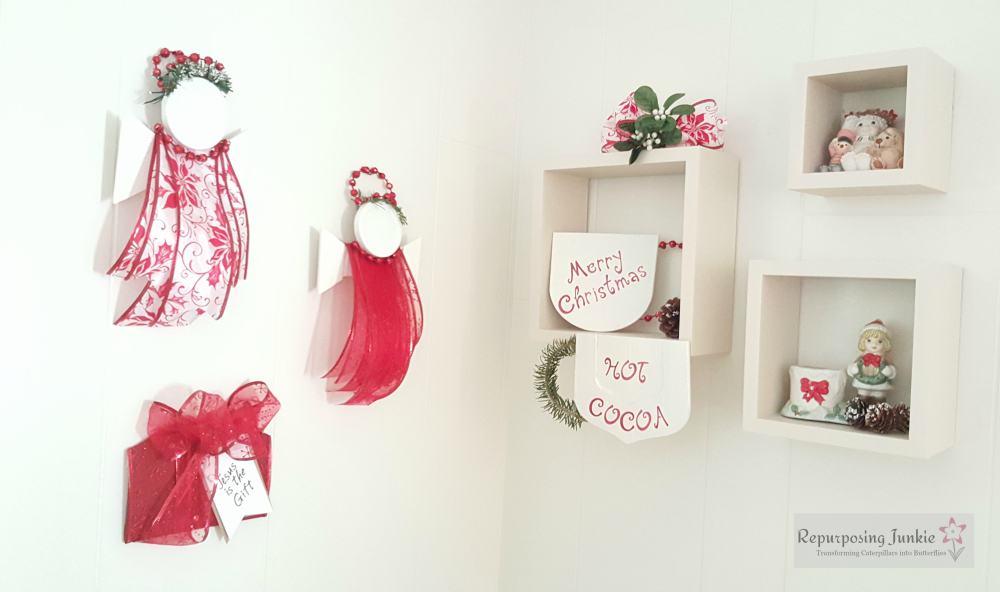 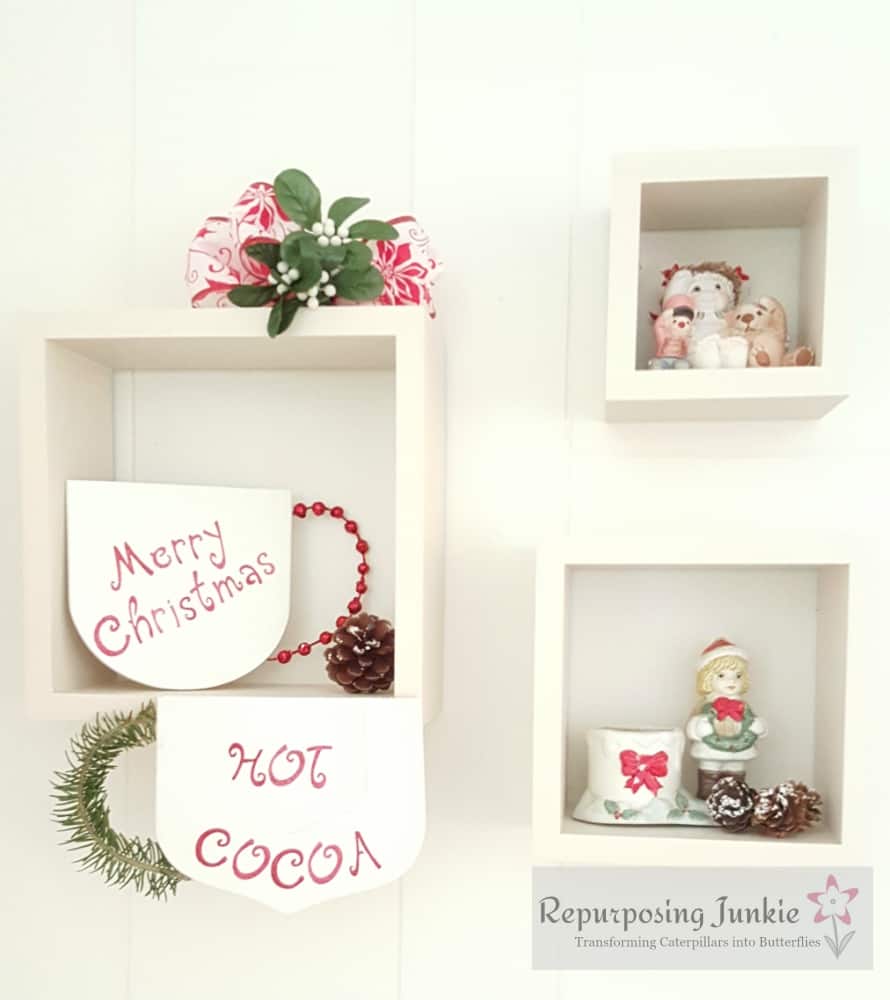 Thanks for sharing How to Repurpose a Ceiling Fan Blade into Christmas Decor!! 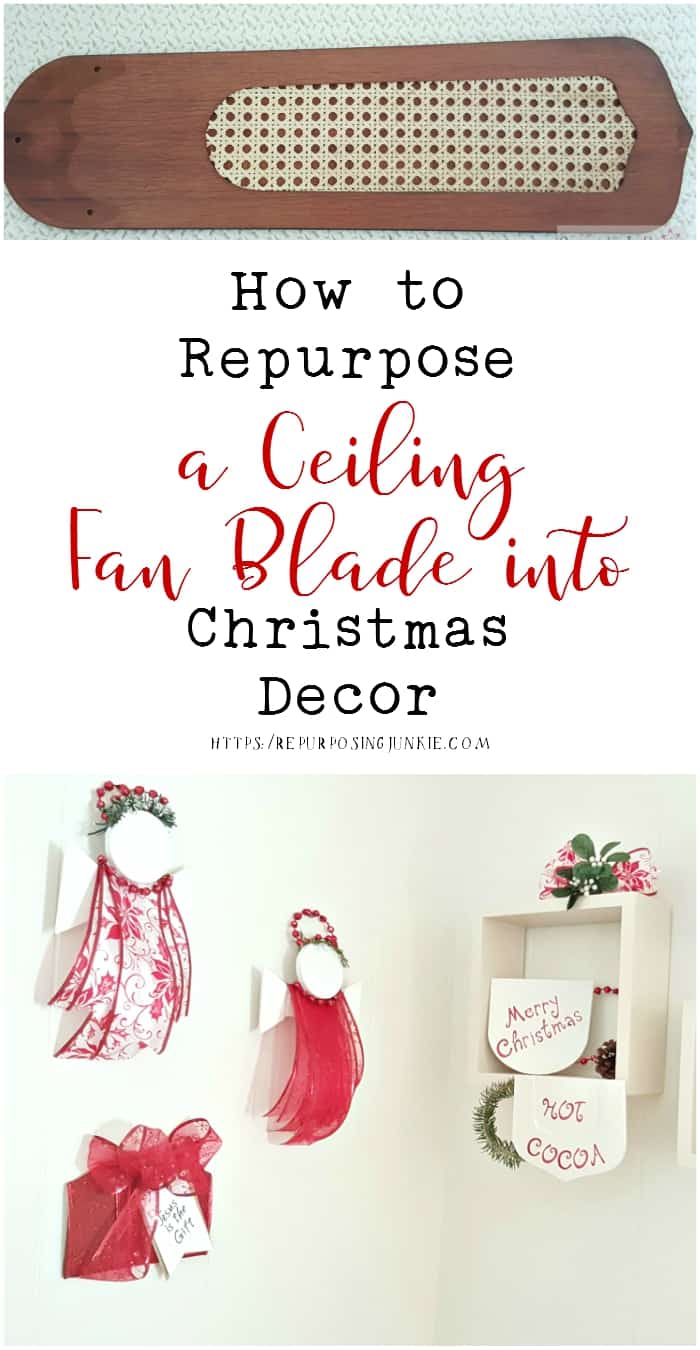